Secret to a long and happy marriage revealed

Surely there must be a secret to making a marriage lasting 70 years.

For Walmsley House Care Home residents Joy (93) and Owen (96) Riley it seems there is no secret recipe for success, no profound wisdom to share. Their long-lasting union is quite simply the product of love, forgiveness, and dedication to their Christian faith.

Owen and Joy, nee Blomfield, grew up in Invercargill, living not far from each other, although their paths had never crossed.

That was until a night in 1949, when Joy attended one of the weekly dances held at the Georgetown Citizen Hall.

Joy arrived at the dance with a date, but that did not deter the self-confessed shy Owen from finding the courage to ask her to dance.

“It was cheeky actually,” Joy said.

However, she agreed, and was impressed with his dancing prowess.

“I decided he was nice… he was interesting to talk to,” Joy said.

For Owen, he was initially attracted to Joy’s friendly personality.

They soon found out, not only did they both enjoy dancing, but they also had a shared love of music. Joy was a pianist and singer and Owen played in the Invercargill Civic Brass Band.

Three years later, the pair married. It was Wednesday, September 17, 1952. The ceremony was held at St Paul’s Presbyterian Church, and the wedding breakfast at the Herbert Haynes’ tearooms.

The couple honeymooned in Nelson, travelling in style thanks to Owen’s father lending the newly-weds his new Vauxhall car.

They went on to have six children, five boys and a girl.

In 70 years, the brood of six had grown somewhat. They now boast 20 grandchildren (15 of whom are boys) and 20 great grandchildren.

Like any couple, the marriage was not all roses, as they say. The couple had faced their share of challenges and disagreements over the years.

“You have to find a place [in your heart] where you can forgive them. If you love someone, nothing matters more than having peace between you,” Joy said. “You learn to give in and admit you’re wrong and to make room for other people’s ideas.”

Owen added - they believed in confessing their sins.

“Slow to anger, quick to forgive.”

It was also their shared faith which had helped them through life’s challenges.

Owen said they faced a family crisis about 20 years ago, and turned to their faith for support, becoming born-again Christians.

We wouldn’t have survived otherwise, as individuals or as a couple, Joy said.

To celebrate, staff at the care home hosted an afternoon tea for them and their 70-plus guests.

However, no gifts were exchanged.

Reflecting on their seven decades together, Joy said – “We have been very blessed.” 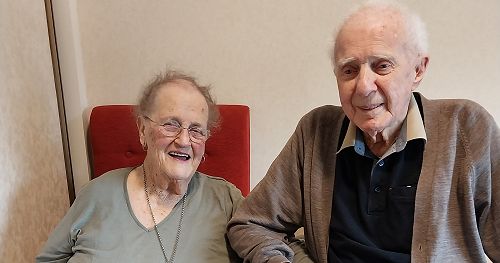 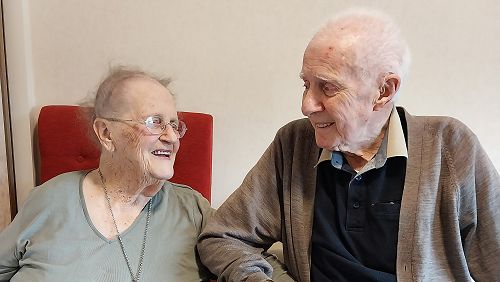